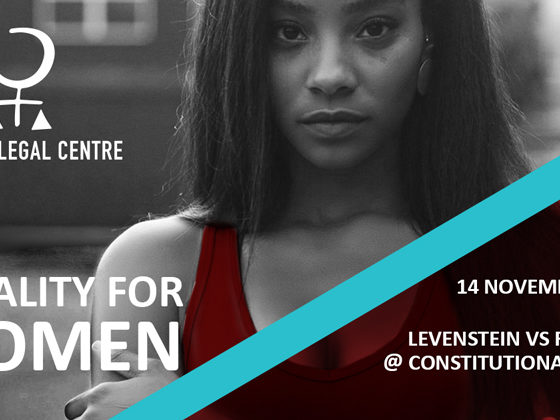 LEVENSTEIN & 7 OTHERS /SIDNEY FRANKEL & OTHERS 170/17 (CC ): PARTIES TO SEEK CONFIRMATION OF JUDGMENT THAT DECLARED PRESCRIPTION OF SEXUAL OFFENCES UNCONSTITUTIONAL

On 14 November the Constitutional Court will hear the case seeking confirmation of the South Gauteng High Court judgment handed down on the 19 June by Acting Judge Hartford in the matter between Levenstein (and 7 others) and Sidney Frankel, the Minister of Justice and Constitutional Development, and the Director of Public Prosecutions, (Case 29573/2016). The judgement struck down section 18 of the Criminal Procedure Act as unconstitutional. The section barred the right to prosecute all sexual offences, other than rape, after a period of 20 years after the offence has been perpetrated.

In the South Gauteng High Court the WLC appeared as a ‘friend of the court’ (amicus curiae). WLC largely supported the case of the applicants (Levenstein & others) and requested the court to extend the remedy sought to all persons including adult survivors, and for it to apply to all sexual offences. This argument was accepted by the High Court.

WLC is now a respondent before the Constitutional Court and will be requesting the Court to confirm the extended relief granted by the High Court, holding that both child and adult survivors of all sexual offences have an unrestricted right to have these offences prosecuted, irrespective of the time that has lapsed between the commission of the offence and the date of the complaint. WLC will support the applicant’s case that section 18 is arbitrary, discriminatory, and in violation of the constitutional rights of sexual violence victims.

WLC will adduce expert evidence from Rape Crisis Cape Town in support of its case before the Constitutional Court.  It will argue that:

The Applicants alleged that the First Respondent (Mr Frankel) committed a range of sexual offences against the Applicants between 1976 and 1991. The sexual offences were of a nature that did not constitute rape, but were indecent assault. The law on sexual offences was amended in 2007 by the Criminal Law (Sexual Offences and Related Matters) Amendment Act to broaden the definition of rape (the common law limited rape to vaginal penetration by a penis) to include both anal and oral penetration. However, section 18 still limits the institution of a prosecution to 20 years after the offence has been perpetrated for other sexual offences, for example sexual assault, exposing a child to pornography, exposing an adult to child pornography, and sexual grooming of children.

For more information on the case,  please contact Adv. Bronwyn Pithey on 084 7027305 or bronwyn@wlce.co.za

To arrange an interview, please contact Angie Richardson on 083 397 2512 or angie@thepressoffice.net